Corporations - Where Ideas Go To Die 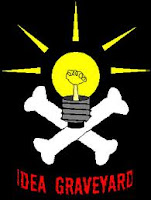 How can we stop big corporations from killing good ideas?  How can they internalize an entrepreneurial spirit?

I spend most of my time working with organizations to help them change.  I use a variety of levers such as: innovation, customer loyalty, or employee engagement.  However, the objective is always the same: to get people thinking so they can make changes to their business.

It's exciting to see people generate new ideas and use the ideas to develop new opportunities.  But implementation always lets air out of the balloon.  When I work with complex organizations we quickly make incremental changes; however, game changing ideas often end up in a graveyard.  Here are two of my recent examples.

The Swish.  I worked with a team of new hires in a technology firm.  Their social media idea was to "swish" content from one mobile to another.  Their thought was: "if you're in a mall with friends and you get a photo that you want to share, no need to send it - just "swish" it to your group."

Great idea.  It needed some work and development, but quickly the team produced a prototype.  There was lots of excitement until we turned it over to the formal organization for commercialization.  Death!

Have you seen the new Galaxy S III?  Put two of them back to back and tap - you can transfer information from one to the other.  No need to send.  Sure, it's not a "swish" but we had a beta a year and a half ago.

The Relationship.  I worked with another team of young people who wanted to make "dating" more exciting.  They recognized the discontinuity in the market where people date long into their 20's and 30's.  Their idea was to build a special app to aggregate and share experiences for couples.

We refined and cycled this idea through the companies "innovation committee."  We needed a small amount of seed funding for experiments.  We never got the money.  The committee could not understand the need and constantly asked the team for proof that the idea would work.  Death!

About a month ago I was reading the Economist.  There it was.  The exact same idea.  A group of young entrepreneurs got the app to market and were overwhelmed with the success.  More than half a million accounts were set up in the first month.  Hey, we had that idea a year ago.

So, what's happening here?  I think that everyone recognizes the barriers to change in big organizations.  We don't create organizations for change, we create them for consistency, efficiency, and low risk.  To maintain the inertia of predictable outcomes we set up: silos, approvals, budgets, controls, reports, rewards, and metrics.  People don't resist change, they just do their jobs.

However, there are ways to overcome the inertia of risk aversion.  I've found that if I ask three precise questions in the right order then I increase the probability of success.  Here they are and in that right order.


Yes, "money" is the last question.  Asking this question too early in the process will send the idea directly to the graveyard.  It takes time, effort, and resources to de-risk an idea before you can reasonably forecast its financial success.

Big corporations don't have to be idea killers.  They can return to their entrepreneurial roots.  They just have to discipline themselves to ask the right questions - and in the right order.