Shanghai Central - Innovation in the East

I'm returning from a week of consulting in Shanghai. Generally I spoke to audiences and presented information on Innovation Through Customer Insights. The central thesis of my work is that organizational change should be driven from the outside. Customers should drive it. There are two major benefits: firstly, it forces managers out of their political silos, and secondly, it engages employees because they love to work for their customers.

I have been to 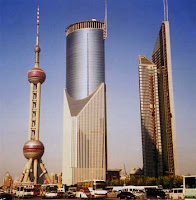 China before but never to Shanghai. It provides an interesting clash of traditional western thinking about government, human rights, and economics.

The first thing I noticed in Shanghai is that it is alive – there is commerce everywhere. It’s the first time in years that I have been awakened by the sounds of buildings being constructed.

Our western world is still struggling itself out of the tar pit of a deep recession. Capital is sitting on the sidelines afraid to get involved. In the west we seem to be looking for reasons not to do business. In Shanghai everyone is looking to do business. There is capital, lots of it, and it’s being used. One of the big oxymorons is all of the Christmas decorations. Christmas has no cultural significance in China except that it is a celebration and it makes money.

So it seems that we have the model for western recovery. Do what the 16,000,000 people in Shanghai are doing. Build the economy on capital. But isn’t that what we do? Well yes, but we have a different political structure – we have a democracy of free people while China has a central government that controls people.

Interesting contradiction. Haven’t we always been taught that democracy and capitalism are linked to produce prosperity that gives us freedom? That may be true, but at this moment that link has provided recession and no clear and fast answers. The trade-off seems to be our freedom. How much freedom would most people give up for a job? I can only pose that question, not answer it.

At least in Shanghai capitalism is being used to push forward prosperity. Money is being made and it is being poured into infrastructure that employs many of the unskilled. So it’s clear that democracy is not the sole garden that can grow capitalism. I think we have to adjust our paradigm. Central planning in China is not Stalinist Russia.

But what about this freedom thing? All of this concern about human rights. You know, those Tibetan monks. Well, I think it’s an issue.

China is governed by a handful of people, and one of the strongest is the mayor of Shanghai. When these people decide to do something it happens. It doesn’t need to go to a center of democracy to enter the gears of gridlock. It just happens – and it happens without criticism. When the Chairman speaks everyone listens in agreement. The governors may be human, but they are never wrong.

The central government in Beijing controls big infrastructure like transportation and communication. The state television channel puts out a constant stream of the glories of China. You can even learn about the Chairman’s daily agenda. The communication channels are controlled. If the leaders don’t want you to hear, you won’t. The Internet has strict controls. YouTube is seen as disruptive – so it’s not allowed. This sounds repressive, but I wonder if some of our politicians and parents wouldn’t want to give the system a pilot test.

The sense of restriction is quite real. I gained half a dozen close friendships in Shanghai. We ate traditional Chinese dinners every night. Yes, everything you’ve heard is true: chicken and duck feet; the spine of the lamb and the stomach of the cow; sea slugs and pig ears. When food is limited and the population is huge, you eat everything. I learned to appreciate vegetables.

However, my point is that I got to know friends during their sacred and almost religious act of eating. We never talked politics. I don’t talk politics State side either, but that’s because of fear of losing friends – not fear of having them sent to jail. On the odd moment when someone did say something approaching a criticism of government the table hushed them and scanned the restaurant to ensure the state police hadn’t overheard.

Well, what about the people. My experience is that they are some of the most kind, generous and welcoming people that I have ever met. Like everyone else in the world they are just trying to get through their day, but they do it with great kindness and respect (except on the roads where they just wonder all over the place and squeeze you into places you don’t want to be.)

Oh yes, I hear the common complaint about Chinese being deceitful, acting one way but never telling you what they really think. That may be true but maybe the truth lies in their long-term view of how to win in the world; and this view conflicts with our actions to succeed in the short term.

One thing though was clear to me, the old adage is apt: we bring a business deal to the table in the hopes that we can build a relationship; whereas the Chinese bring a relationship to the table in hopes of finding a business deal. By the end of my visit to Shanghai I had new friends and believe they were being open and honest with me. We’ll see if this proves out on my next visit.

My last day in Shanghai was a treat. It started with breakfast with a friend from Paris who is now working in Shanghai. Like the Chinese I believe in maintaining relationships. After breakfast I knew I had to venture into the bustling city to do some shopping; an intimidation that I did not welcome. My client contact, David, solved this problem as he solved all other problems that came up while I was there. He assigned his mother to me for four hours. What an experience.

David’s mother is a retired schoolteacher. She taught accounting to upper class students. She is an exceptionally classy person. But with all of her accomplishments she does not speak English (I’m not implying that she should – just stating a fact about our acquaintance.) We got by with hand signals, pictures and the odd guttural grunt. What I saw, though was a professional at the top of her trade. This woman can shop!

I thought my wife could shop, but David’s mother holds the Olympic gold. I would have been eaten alive in the shopping district. I didn’t want much; just T-shirts for the grandchildren and a gift for my wife. It took her time to get into gear and actually center in on my needs but then the machine went to work.

First it was the T-shirts. We hit a few shops. I chose what I wanted and then the negotiations began – or should I say “the fury.” By the time we left the shop owner was chasing us down the walkway shaking her fist and yelling. I can only imagine the invectives. Now let’s get this straight, we’re talking T-shirts, not nuclear arms. Oh yes, I got three high quality T-shirts – made in China, for $10.

Now turn the page from the back alley T-shirt negotiator to the sophisticated gift buyer. Out she went into the street with me in tow. She darted from store to store demanding that clerks expose their merchandise. She poked, she prodded, she clinked, she gazed. Good quality, bad price; bad price, good quality. Out we flew from the high-end shops and scurried down some side streets. Out of one small shop into another – this was her plan all along. She had all the information she needed about features, quality, and price. She was in control. The only question now was finding the victim.

Finally a hit; a small shop with good merchandise at reasonable prices. Lucky for me the owner spoke good English and had a calculator that converted Chinese RMB into US dollars. Let the games begin! My T-shirt banshee morphed into a sophisticate. A different victim summoned a different persona. We started at $340 and struck the deal at $68. The owner was close to tears. She told me that my representative had driven the best deal in the famed history of shopping in Shanghai. I think I believe her.

Quickly now we dash across the street for a traditional Chinese lunch. Even though we couldn’t speak didn’t mean we couldn’t communicate. Relationships are secured at the meal table, not the sales counter. Out comes the cell phone for a hyper call to David. The phone passes to me. David’s mother wants to know if I’m satisfied with the purchases. My nod quiets her eyes; she puts me in a cab and is swallowed up into the crowd.