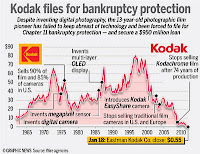 I get tired of the presumptuous analyses that assumes that mis-management caused the decline of this beloved icon. The fact is that death is natural, even for corporate icons. There is no reason to believe that Kodak could ever get out of its own way on its slow decline to death.

Kodak lived for over 130 years. At its peak it employed 140,000 people around the world and sold up to 75% of the film and 85% of the camera's in the US. That's what shareholders call success. Those are high margin products. Those are big numbers.

Let's not be naive. Kodak saw digital when it arrived on the horizon, but why would the big gorilla enter such a low margin market, particularly when all of its people, processes, and technology were aligned to dominate the personal photography market that it created.

And what if it has gone digital? What if it built the world's best digital camera? Where would it be today? It would be dying at the hands of the smartphone with it's roots in software engineering, not photography.

But Kodak had a "helluva" run. It made money for its investors; it provided good work to thousands of employees; and it gave its customers, like me, memories that are captured forever in our family albums (which I am quickly digitizing).

Bob Hope would agree: "thanks for the memories."

Email ThisBlogThis!Share to TwitterShare to FacebookShare to Pinterest
Labels: Kodak