Grease Is The Word

A few weeks ago I got back from Athens. I was invited to give a keynote address to Customer Service executives at their annual conference. The conference went well and the feedback on my presentation - Building Sustainable Organizations - was positive.

I've been to Athens several times and I must admit that I'm not a big fan. It's a huge, sprawling city with homes built on the sides of bowls - and it has little or no skyline. Most tragic is that Athens has struggled to showcase its antiquities. Yes, they have been working on the Acropolis 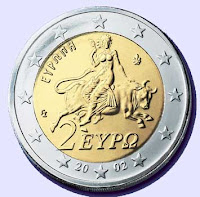 for years and it's getting better, but look off the mountain a mile into the distance and you'll literally see the ruins of the Temple of Zeus decaying in an un-kept park.

The financial crisis in Greece has Athens and it's inhabitants by the throat. The city continues to spiral into poverty and squalor. The most precious item in the city is a parking spot - but don't worry if you don't have one, just abandon your vehicle like so many others.

As I walk the streets of Athens I don't get a feeling of friendliness - it's more despair. People do not see a way out.

On the evening of my arrival our hosts, Boussais Communications, took the speakers to dinner. I asked about the financial crisis. The answers were surprising:
Well, it seems that laborers in Greece didn't like the idea of government cutbacks; and it looks like the EU leadership is going to get even tougher on Greece. This is not going to be pretty.

For me this situation casts me back to the early 80's in Canada. At one point I worked for the central budgeting organization in the government. My biggest learning is that when government doesn't have money, it does have flexibility. It can't do anything. All of it's energies are focused on paying interest on debt, reducing annual deficits, and eroding the national debt. It took Canada a decade to get it's finances in order but it did, and now it is financially strong - giving the government alternatives in how to help Canadians.

Ooops, do you see a parallel. The US is now mired in debt. We pay over $1,500,000/minute to service our debt. If we can't manage ourselves better then our creditors, like China, will call our notes. We may not want to make sacrifices to get the US financially stable, but I'd prefer that we make the choices rather than having them imposed.

Yes, Greece is on a slippery slope; however, there is grease on the slope that we're riding as well.
Posted by Bud Taylor - Customer Driven Change at 1:15 PM No comments: